Around the 18th century, the industry used controllers with mechanical feedback for process control. Generally, the controllers had only two actions of the Proportional, Integral and Derivative set, but never the three of them. At that time, the devices controlled the actuating speed of steam engines and aimed to provide greater stability to industrial machines operation.

In 1911, the businessman and inventor Elmer Sperry created the PID control (Proportional  Integral  Derivative), which combines these three actions. Sperry designed this controller for the United States Navy. He aimed to automate ship steering and emulate the behavior of a helmsman, who was capable of compensating persistent variances and predict future variations in the high seas. A few years after this creation, the engineer Nicolas Minorsky published the first theoretical analysis of PID control, describing its behavior in a mathematical formula that is used as a basis for calculation until today.

Currently, in the business field, it is possible to measure efficiency in different processes and in various ways. Each sector has goals, indicators and results. In addition, control is carried out to obtain results and seek the best efficiency in the use of resources. Control loops and algorithms are employed to guarantee that the manufacturing system of an industry operates by exploiting its limits within an acceptable pattern of use.

Nowadays, even with the most advanced control techniques available, PID controllers are the most used option in processes loops (BAZANELLA, 2005), such as petrochemical, cellulose, dairy or water treatment companies, among others. When well configured (manual mode), this PID Control can anticipate, reduce and even eliminate noises, which makes it desirable. Sometimes, the manual configuration of PID parameters requires expertise and prior theoretical knowledge from those who operate the device to find the best control for the process. According to Aström; Hägglund (1995), estimations indicate that about 90% of control loops in industrial processes operate with this controller.

In a systems process with output feedback, a loop is formed. This arrangement is called a closed-loop. In the closed-loop system, the controller constantly receives the difference between the SP and the actual value of PV. This difference is called Error and, based on it, the device creates a control signal to decrease the error to a small error or zero value (OGATA, 1982), regardless of whether there is a signal of disturbance in the process or not. The closed-loop control increases the accuracy of the control system and the rejection of disturbance effects on PV, decreases variation through instabilities and increases robustness.

The PID control combines Proportional, Integral and Derivative actions to create a control signal, where each action has a strong characteristic that helps to control the output: The Proportional action makes the system respond to the present error and enables immediate action in the face of variations or disturbances; the Integral action eliminates errors such as jumps or steps in a permanent and long term regime; and the Derivative action anticipates the behavior of the process (BAZANELLA, 2005). 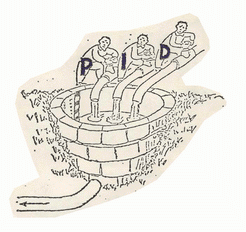 Because of the restriction of physical order and security, there is an upper and lower limit to the application of the MV signal. This operating range is called the Proportional Band. If the control signal operates outside the limits, it is saturated and operates with non-linear behavior. The higher the Proportional action value, the lower the Proportional Band and the higher the control power. That makes the system to respond with greater speed, but the output signal can exceed or fall below the setpoint in permanent mode and the error will never be completely overturned. 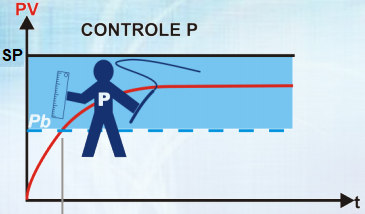 When Integral action is applied in an isolation way, it worsens the relative stability of the system. When used in conjunction with the Proportional action, it helps to annul the error in a permanent mode. The higher the Integral value, the longer it takes for the system to reach the setpoint in a permanent mode. 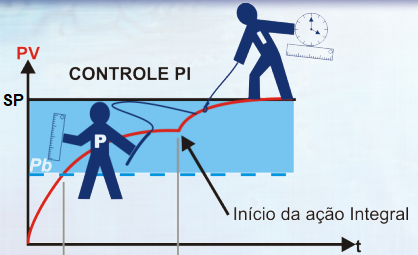 The process usually has inertia in relation to changes in MV, that is, the time that a change in the process input causes a change in the output. The Derivative action anticipates the control action so that the process reacts faster than usual. This predictive action increases the relative stability of the system and makes the response faster and less oscillatory according to the derivative time. In a permanent mode, this action will be null because the error value will be constant. 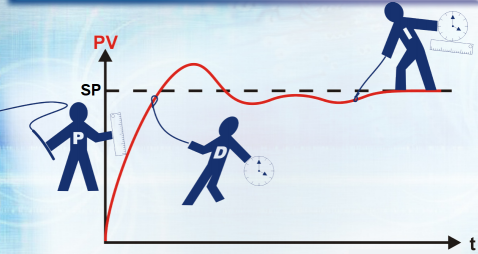 The mathematical equation to calculate the MV control signal is shown below. In it, the Kp, Ti and Td parameters are related. The Error value, presented as e in the equation, it is used by each control action to create the signal.

Thus, the PID control combines the three actions described above and each one compensates for the undesirable characteristic of the other. The Integral action in permanent mode makes the error null and the oscillatory effect of the Integral action is suppressed by the Derivative action, because the anticipated effect makes the response faster and increases the relative stability of the system. The Proportional action changes the speed with which the configured setpoint is pursued. These behaviors can be observed when you individually increase the value of each action in the process.

The PID relevance continues to be satisfactory over time. Many devices in the automation field are already marketed with this control as an operational option. Currently, several NOVUS products already have the PID control as a native function, such as, for example, the N1030 controller, the N1200 controller, the N2000 controller, among others. Besides offering manual adjustment of the PID parameters, NOVUS controllers also offer the PID self-adaptive feature, where the device identifies the process of the client and auto-configures the best values for the Proportional, Integral and Derivative parameters, looking for a satisfactory control.

LogBox-RHT-LCD - Accurate logs on the display

The LogBox-RHT-LCD data logger presents reliable and accurate temperature and humidity readings on its LCD display. In addition to providing real-time measurements, you can also check the minimum and maximum values of the acquisition period.

Do you need to control process that include temperature and time in an easy and safe way? NOVUS has the solution you are looking for: N1030T Temperature and time controller. With its small size (only 35 mm deep), N1030T is a PID controller with high performance, perfect for applications that have a limited amount of space and require practicality and cost reduction.

Calibrate your temperature instrument with the quality of NOVUS Metrology Laboratory

AirGate Modbus: flexibility, high performance and connectivity in one product

AirGate Modbus is a gateway designed to create a network of wireless sensors. It can be used as extender of Modbus RS485 network and offers flexibility and scalability for the various networks inside facilities. It has long range wireless communication, reaching up to 3200 feet.