According the European market director Valério Galeazzi, the Hannover Messe is an important meeting point: "We have received distributors who visited us because their customers are asking for NOVUS brand products." 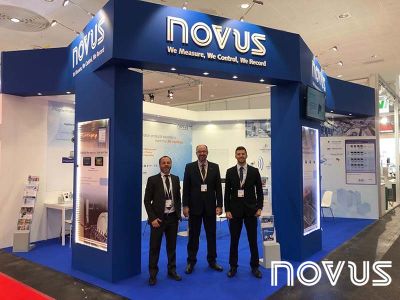 NOVUS attended Hannover Messe for the twentieth time. The trade fair took place between the 1st and 5th of April in Germany and more than 200,000 people visited the more than 6,000 exhibitors of what is considered the largest industrial technology event in the world. One of the few Brazilian companies with its own booth at the fair (only three in total), NOVUS received highly qualified visitors from all continents.

According the European market director Valério Galeazzi, the Hannover Messe is an important meeting point: "We have received distributors who visited us because their customers are asking for NOVUS brand products. This shows that the name of the company is more established and that customers are considering our products in their projects, understanding the quality of what we manufacture," said Galeazzi.

NOVUS CTO Marcos Dillenburg adds: "The most striking difference between this and the previous appearances is that now visitors are including NOVUS in their visitation route. Before we were discovered, today we are required".

Among the releases that most interested visitors were the DigiRail Connect family of intelligent I/O modules and NXView, an innovative HMI with high resolution screen, capacitive touch and IoT-ready.

The presence of major software companies such as SAP, Oracle, Amazon and Microsoft confirms an increasing convergence between computing and automation, showing that IoT and Industry 4.0 are no longer a trend to become a reality.

In Dillenburg's words, "it was possible to confirm that the technologies we believe and the products we develop are aligned with the technologies developed by the big players, which shows that we are on the right track."

Designed for the modernization and digitalization of the electric power industry, the 13th Latin-American Smart Grid Forum has NOVUS as a sponsor and exhibitor. The event, held on November 29th and 30th, gathered authorities, executives, managers, and engineers from electric power utilities and distributors from countries such as Brazil, Chile, and Colombia.

Aderbal Lima, founding partner, CEO of NOVUS for 38 years and current board member of the company, participated in a business mission to Dubai in the second half of November. Lima attended the event as a representative and president of the Foreign Trade Council of FIERGS (Federation of Industries of the State of Rio Grande do Sul, Brazil). The activities at Expo Dubai serve to create networking between entrepreneurs and investors. In addition, it was also possible to visit startups and the information technology industrial center.

When the integrity of a product or package is threatened because of variations in humidity, the control and recording of this variable are essential to avoid losses. To maintain the quality standard in measurements, equipment with calibration certification is required. Thus, NOVUS offers relative humidity calibration for all its compatible products and for third-party instruments.

The 13th edition of the Smart Grid Forum takes place on November 29th and 30th in São Paulo, at the Frei Caneca Convention Center. In addition to participating in the exhibition, NOVUS supports the initiative as a sponsor in this edition that has the theme "Accelerating energy digitalization and sector modernization in Brazil and Latin America".